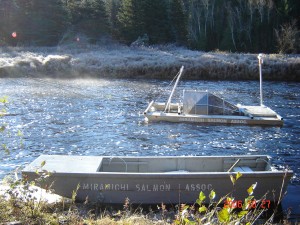 An accurate estimation of the total smolt population migrating from the Northwest Miramichi River and its tributaries is an essential component to understanding and managing Atlantic salmon in this watershed. 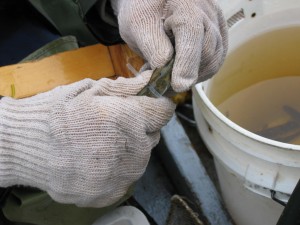 On the Sevogle, Northwest, and Little Southwest Rivers smolt wheels are used to capture smolts for tagging in May when they migrate downstream to the ocean. The smolt wheel is strung across the river by an overhead cable and floated on the top of the water by two large pontoons. Any fish that enters the trap are guided into the trap’s holding box which is located at the back of the smolt wheel. Each fish species caught is identified, counted and released, except for salmon smolts, which are measured for fork length and then tagged with streamer research tags. After the smolts are tagged they are moved upstream of the smolt wheel. The percent of tagged smolts that are recaptured at the smolt wheel allows us to estimate the number of smolts moving out of each river. 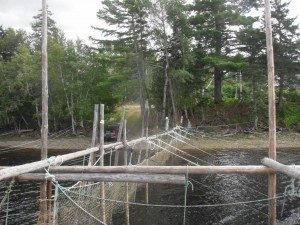