The Miramichi Salmon Association offers a major scholarship for salmon research in honour of its long time former President, Jack Fenety of Fredericton. The “Jack T. H. Fenety Conservation Scholarship” is made available each year to a selected graduate student attending a university who is conducting meaningful research about wild Atlantic salmon and/or its habitat which will have relevance for the Miramichi watershed. 2021 is the nineteenth year this scholarship has been offered, and we are pleased to announce that Mr. David Roth, PhD candidate at the University of New Brunswick, Fredericton, NB is the recipient of this award. 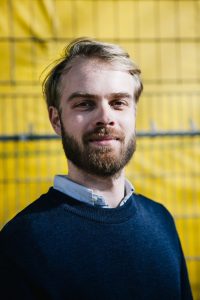 “We are pleased to present this award to such a deserving student," said MSA President Mark Hambrook. “The Jack T. H. Fenety Scholarship is something we are very proud of. It was established to honour Mr. Fenety’s legendary contribution to the protection and enhancement of Atlantic salmon stocks. His stewardship of the Miramichi River has paralleled the survival of that watershed as one of the most productive sources of salmon stocks in the world. It is only fitting that we offer this scholarship to Mr. Roth for this very important work.” 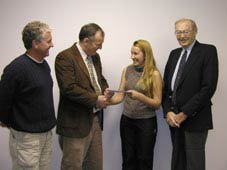 Jack T. H Fenety Conservation Scholarship
The Miramichi Salmon Association is a conservation group focused on the preservation and enhancement of wild Atlantic salmon throughout its spawning range, and especially in North America’s most abundant Atlantic salmon river, the Miramichi. The MSA, established in 1953, has as its mission statement: management actions to optimize the population of juvenile salmon stocks in the Miramichi River. It is directly involved in collaborative research and management initiatives to benefit the Miramichi River and its Atlantic salmon resources. Financial support for the MSA comes from the volunteer efforts and contributions of its members and sponsors both in Canada and the United States.

The Miramichi Salmon Association maintains a fully operational salmonid culture and research facility with accommodations at the Miramichi Salmon Conservation Centre, with flow-through and re-circulation systems in support of research activities. The Centre is located on the banks of the Northwest Miramichi River at South Esk, New Brunswick and applicants that plan to utilize this facility will be given priority.

Eligibility for Funding
The scholarship is for a student conducting graduate level research at a Canadian or American university.

Funding Level
One scholarship per year valued at up to $10,000 CAD will be awarded. The funds will be disbursed directly to the student and may be used for the purchase of equipment and materials, for travel expenses during fieldwork, and as a living allowance. The funds may not be used to defer administrative fees or other costs with the university, government, or private collaborators. Multi-year proposals will be considered, however, funding is on an annual basis and the second year’s money would have to be applied for according to the regular funding schedule. The consequences to multi-year research must be identified if only one year of funding is provided.

Subject Areas
Areas of research must involve the Atlantic salmon and provide knowledge that will assist the Miramichi Salmon Association in delivering its mission of management actions to optimize the population of juvenile salmon stocks in the Miramichi River. Relevant research topics include, but are not limited to, aspects on carrying capacity of habitat, inter-stage survival rates, constraints on production, effects of competition, predation at various life stages, the consequences of stocking juvenile salmon and ways to improve stocking strategies. The research can extend into the estuary as it relates to the survival of smolts or adults, but is not intended for marine research. The work does not necessarily have to be conducted on the Miramichi, but must be relevant to the Miramichi and the objectives of the MSA and priority will be given to work carried out at the Miramichi Salmon Conservation Centre..

Reporting Requirements
A brief interim report describing progress to date is required in July of the funding year, before the second payment is released to the researcher. A final report summarizing research conducted, results and conclusions from the research must be submitted to the Miramichi Salmon Association within the 12-month period of funding. A hold-back of 10% of the scholarship will be provided upon receipt of the final report. A financial report is also required describing how the funds were used in the conduct of the research.

The Miramichi Salmon Association anticipates that much of the research sponsored under this scholarship fund will be published as university theses, refereed journals and in other publications. The MSA requires that its financial support to the research be acknowledged in such publications and that copies of the publications be provided to the MSA office.

Application procedure proposals are to be completed in the format described in Appendix 1 and submitted to the Miramichi Salmon Association office at the following address:

Proposal Evaluation
Proposals will be evaluated by the Miramichi Salmon Association using the following criteria:

Appendix 1
Format for Proposals
The following outline should be followed when preparing proposals requesting support for research from the Miramichi Salmon Association. Proposals should be presented in a concise manner. All technical terms should be explained. Failure to provide the required details described below may disqualify the application.

Title
A concise, one-sentence description of the project.

Summary
One paragraph non-technical summary of the proposed research including issue, proposed methods and anticipated benefit to achieving the MSA mission.

Background
One paragraph describing the knowledge gap to be addressed by the research as it relates to the MSA mission.

Study area:
Describe the location where the research will be conducted.

Anticipated outputs:
One paragraph describing the expected products including final and financial reports to MSA, expected university theses, publications, etc.Identify how the research data will be secured for the future.

Collaborations:
Name and describe the collaborators in the research.

Budget:
Provided a detailed budget of the direct cash and in kind contributions of:

Indicate whether contributions are secured or requested. Indicate what facilities might be required at the Miramichi Salmon Conservation Centre .

Resumes
Provide a one-page c.v. for each of the graduate student(s) requesting the financial support. Provide a max. two-page c.v. of the research supervisor summarizing the supervisor’s research ability and past performance in supervising graduate level research.