Starting in 2008 the Miramichi Salmon Association, in collaboration with the Atlantic Salmon Federation (ASF), developed a study to track kelts from the Miramichi River.

The purpose of this program is to understand the migration paths of kelts, from the river to the ocean and back again, and to determine what temperatures and depths kelts prefer to migrate through.  In addition, we will be able to determine how long individual kelts spend in the ocean and conclude how far consecutive spawners go to recondition.  Also we may be able to pinpoint possible sources of mortality for kelts as they make their way to and from the ocean.

To find out more about kelt biology and the tagging process, or to read the reports, please select a topic below:

Thank you to all our donors and funding partners!
We want to take this opportunity to thank all of the people who have donated funds towards the kelt tracking program.

Mature adult Atlantic salmon spawn in the fall and over-winter in the river.  In spring after the ice melts, the kelts feed heavily on smelts and migrate out of the river between ice out and the end of May.  On the Miramichi River, 15-20% of the Atlantic salmon will return to spawn again, termed repeat spawners.  These repeat spawners are typically larger than maiden fish that have never spawned, and make up between 25-40% of the eggs deposited in the river. Within these repeat spawners there are two groups of fish; alternate spawners which spawn ever second year and consecutive spawners which spawn every year.

Accoustic Tags
The tags are inserted into the body of each fish and allow us to track them as they pass the receiver.  The tag sends out an acoustic ping at a set delay.  When the taggets within range of the receiver, the receiver records the unique tag ID number which identifies the fish, as well as the time and date of the encounter.  Some tags are equipped with the ability to measure temperature and pressure and this information is also collected by the receiver.  The tags used for this study have a battery life of approximately two years.  This means that we will be able to track the salmon as it exits the river and when it comes back again, up to one and a half years later.

Satellite Tags
Kelts are angled and brought to the surgery area in a tank supplied with oxygen.  Once the surgery was ready to start the fish are anesthetized in a solution.  A small incision is made in the abdomen of the fish and the transmitter inserted into the abdominal cavity.  The incision is closed with 2 -3 sutures and the fish is flipped over and the satellite tagged attached through the dorsal musculature before the fish is placed in a recovery box for at least 1 hour to ensure they wake up before being released. 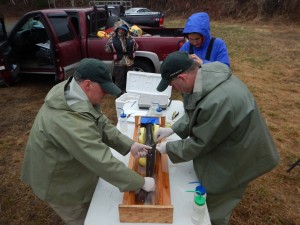 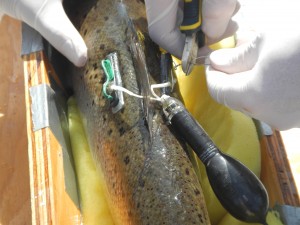 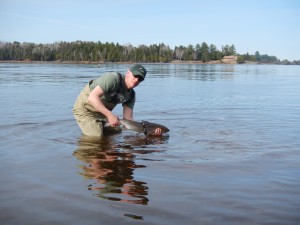 Jon releasing a fish after recovery 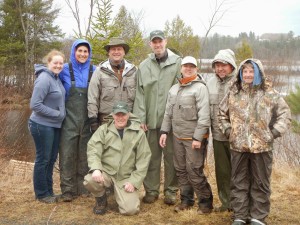 Staff and volunteers helping with the kelt tagging 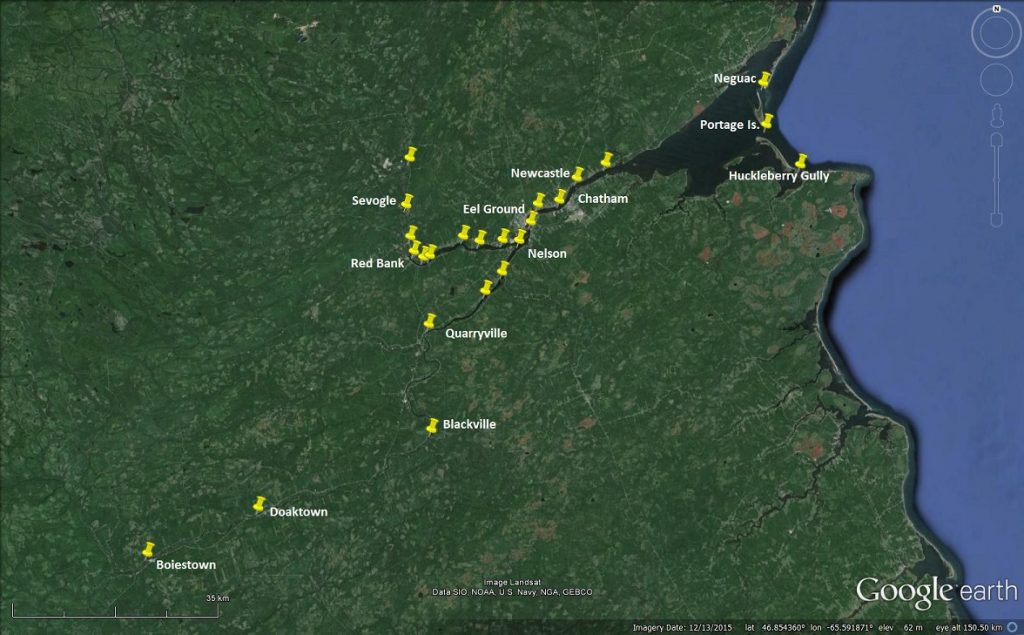 Receiver locations (yellow pegs) in the Miramichi River and Bay. 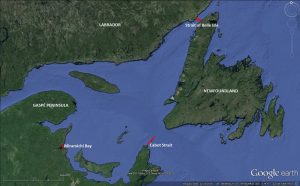 Project Results:
Results from this project can be found in the links to the reports below.

*2010 updates
Two kelts were picked up on receivers associated with other research projects off the coast of Newfoundland.  One kelt was picked up in January 2011 near Twillingate and the other in May near Cape Broyle.

Of the nine fish that returned to spawn in 2010 as consecutive spawners (spawning each year), five successfully over-wintered in the river and exited the river in the spring of 2011.  Of the five that successfully made it to the ocean, one made it back to the river to spawn for a third time.  In addition, four kelts have returned to the river from Greenland, as alternate spawners, after spending over one year at sea feeding and traveling.

2009 Results
The spring of 2009 was a great year for spring salmon fishing and we were able to catch all of the kelts in three days.  Overall 50 kelts were angled and tagged over a three day period, from May 6 to May 8, 2009 on the Northwest and Southwest Miramichi.  Twenty five kelts were tagged on the Northwest Miramichi, at Red Bank, and twenty five kelts were tagged on the Southwest Miramichi at Quarryville.  A range of fish sizes were tagged, with the smallest being 22.2 inches (2 lbs) and the largest being 37 inches (12.5 lbs).  Fifteen of the fish were female, thirty three were male and two were of unknown sex.  Forty five of the fish were implanted with acoustic tags, and five were implanted with temperature/pressure tags.

Of the 50 kelts tagged, 46 made it though the outer array in Miramichi Bay, 8 kelts passed through the Strait of Belle Isle on their way to Greenland and currently four kelts have returned back to the river to spawn in the fall of 2009.  Of those four, it appears that three successfully over-wintered in the river and exited the river mouth in the spring of 2010.  One of the kelts that successfully over-wintered in 2009/2010 returned to spawn again in 2010 for at least a third time, however the other two did not successfully return to spawn.  Additionally no additonal kelts that were tagged in 2009 returned to spawn in 2010 as alternate spawners.

2008 Results
Overall 50 kelts were angled and tagged over an eight day period, from May 7 to May 14, 2008 on the Northwest and Southwest Miramichi.  Forty-one kelts were tagged on the Northwest Miramichi, near Red Bank, because the angling was better during the time when the tagging took place.  Nine kelts were tagged on the Southwest Miramichi in Quarryville.  The surgery typically took around six minutes and all fish recovered fully. A range of fish sizes were tagged, with the smallest being 21 inches (1.8 lbs) and the largest being 35.5 inches (8.5 lbs).  Twenty five of the fish were female, twenty one were male and four were of unknown sex.  Thirty of the fish were implanted with acoustic tags, for location only, and twenty were implanted with temperature/pressure tags; which in addition to marking the fishes’ location records water temperature and pressure (depth) of the fish as it approached the receiver. 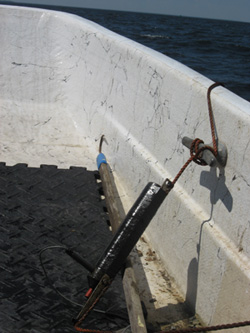 Downloading one of the underwater receivers

Of the 50 kelts tagged 48 made it from the head of tide, at Quarryville or Red Bank, to the mouth of the Miramichi River, near Sheldrake Island.  From the mouth of the Miramichi River, all of the 48 kelts made it to the edge of the outer bay near the barrier islands, and headed into the outer bay and into the Atlantic Ocean.  Twenty two kelts were picked up by receivers in the Strait of Belle Isle during the first three weeks of July.  Additionally, three kelts returned back to the Miramichi River in July to spawn again this fall.  The kelts that have not been picked up by the Strait of Belle Isle receivers may have exited through Cabot Strait, may be in the Gulf of Saint Lawrence or may have died at sea.