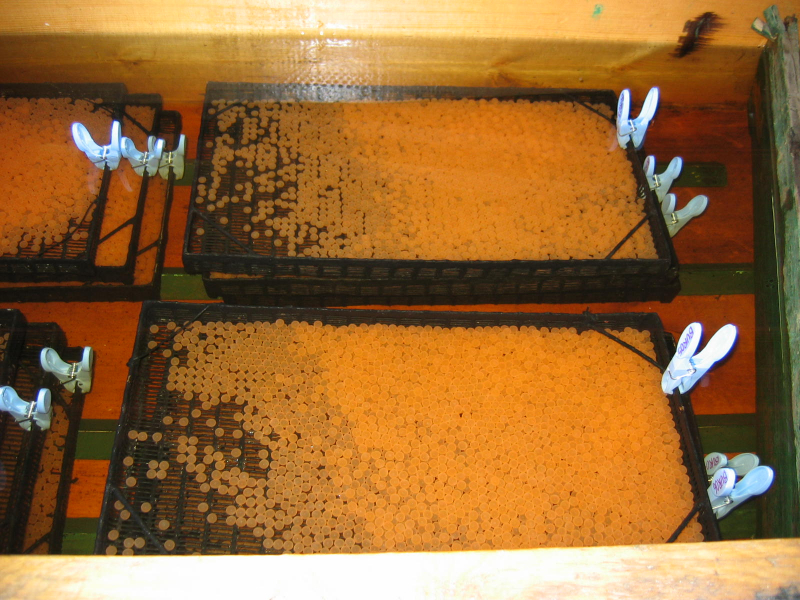 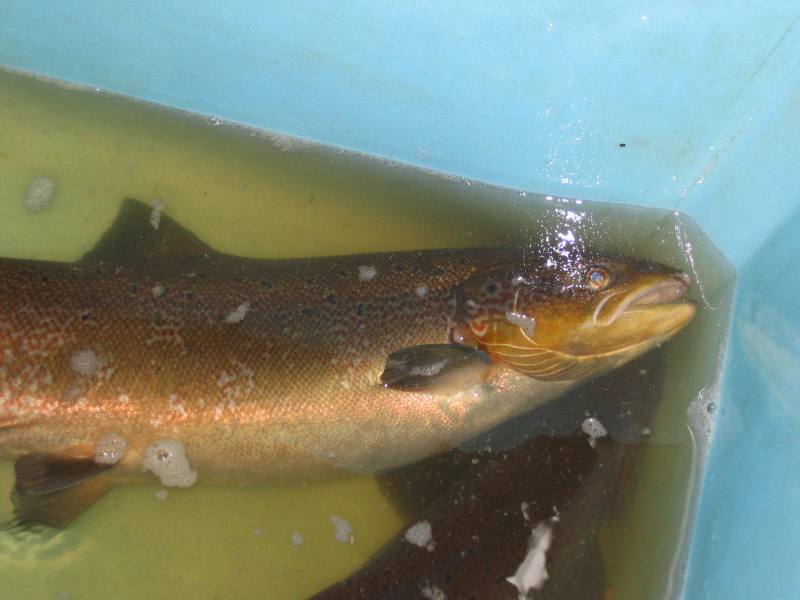 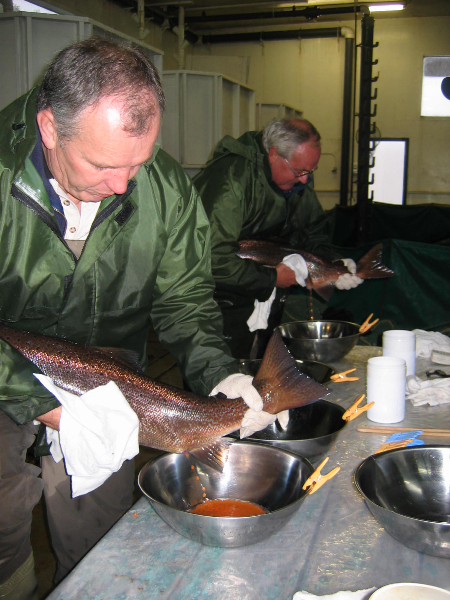 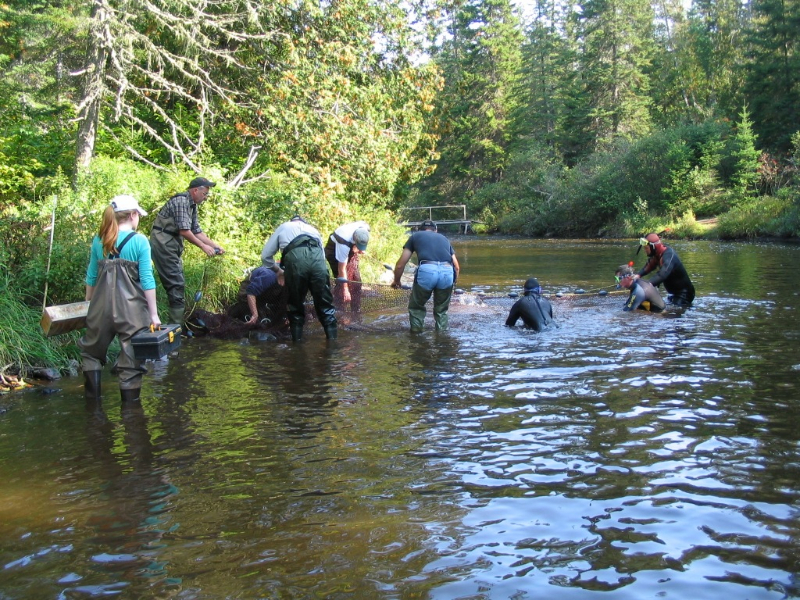 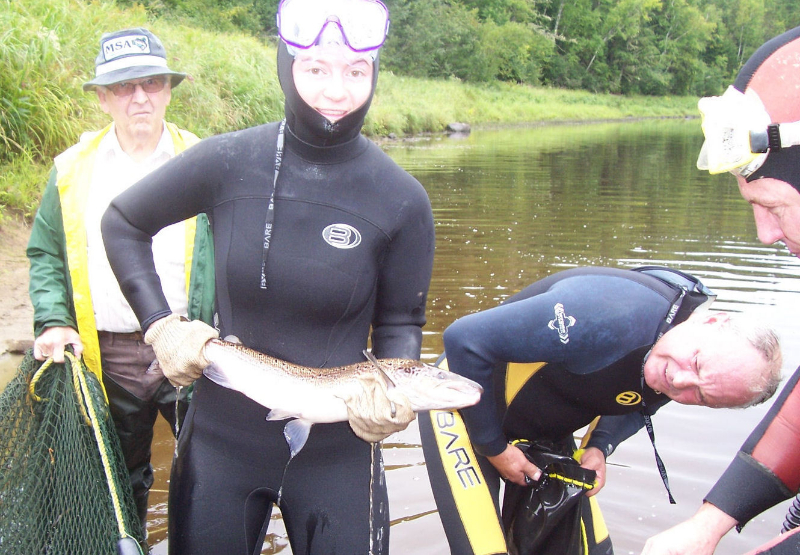 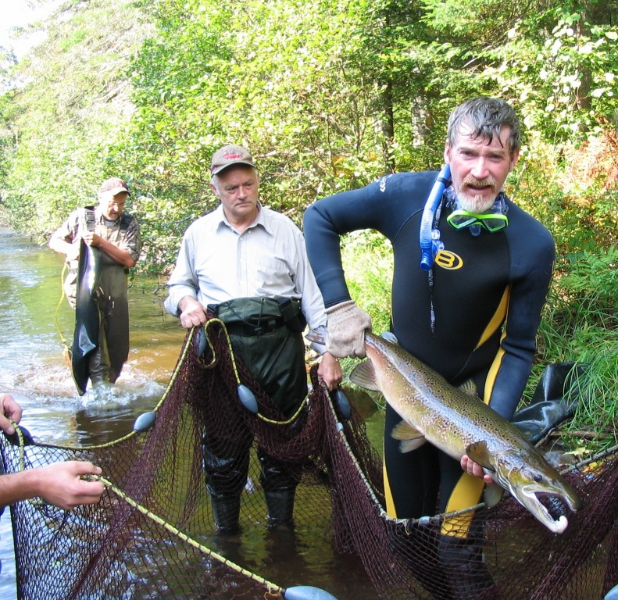 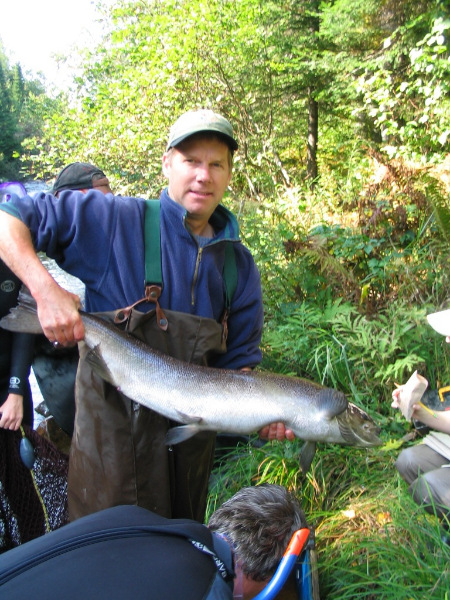 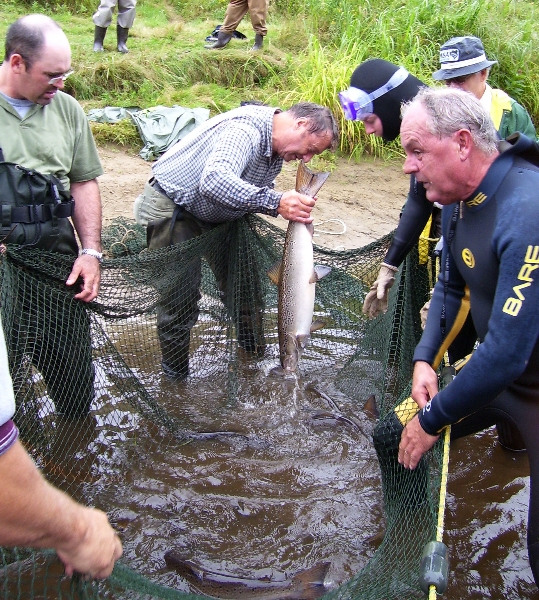 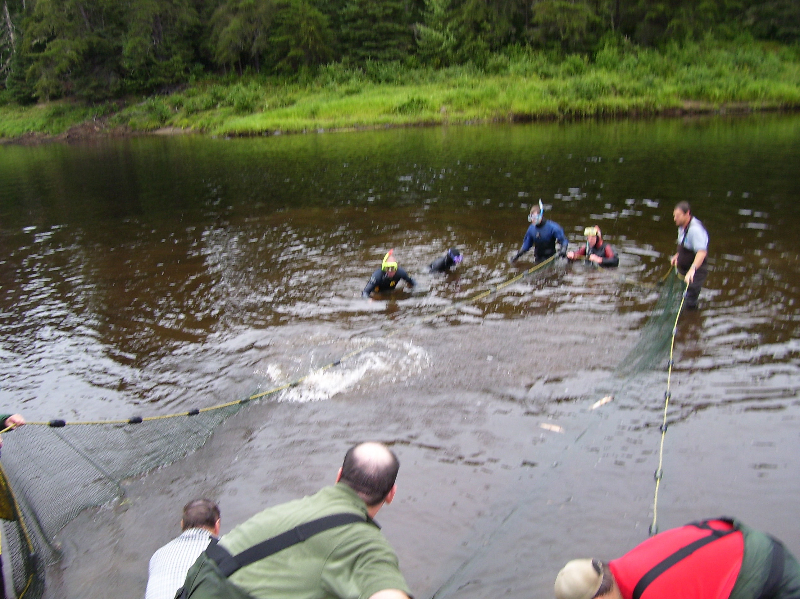 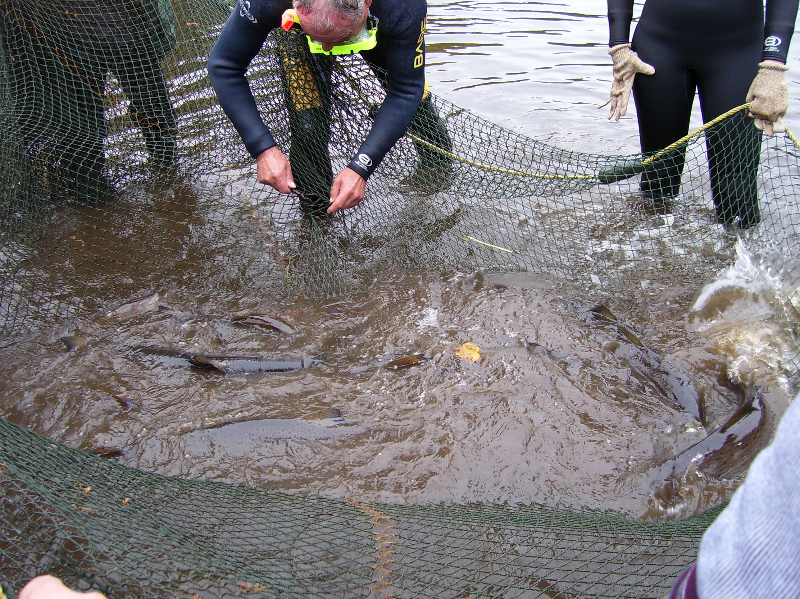 Broodstock, or adult spawning salmon, are collected from the river each year by the MSA and its members for spawning at the MSCC.  The eggs are incubated at the Centre over-winter, and released back to the rivers in June as first feeding fry, strategically placed where juvenile densities are low.

The collection takes place from August to November.  Male and female adult salmon are caught by angling, seining or trap netting and transferred to the MSCC and kept in special tanks until ready to spawn. Before spawning, spawners are anesthetized to reduce the risk of injury to the fish. When the females are ready, usually mid October to mid November, the eggs are collected by pressing gently on the female’s belly area or flank, depositing the eggs directly into stainless steel containers. The eggs are fertilized by the male salmon’s sperm and placed in special incubator trays supplied with fresh flowing water. After spawning the adults are all released into the main river.

When the eggs start hatching, the young fish (alevin) first absorb nutrients from their attached yolk-sac. Six to eight weeks after hatching, the fish (fry) are ready to eat on their own and are moved to a small tank and fed with specially prepared food that contains all the necessary nutrients.

Seining operations are carried out under the guidance of MSA staff. Angling for broodstock is conducted by camp members in the normal fishing season, with the same bag limits, and following the same regulations as other anglers. The salmon that would normally be released back to the wild and counted toward the daily hook and release limit, are placed in a submerged wooden holding box for transport back to the MSCC by MSA staff. JD Irving staff transport the adults from their counting fence to the MSCC with their own vehicle, and the Friends of the Kouchibougaucis also transport their own fish.

We estimate we produce 5000 eggs per female salmon spawned. Stocking locations are often chosen based on low juvenile densities from electrofishing surveys during the summer. Tributaries that were previously blocked to fish migration by obstructions such as beaver dams but are now accessible are also stocked in an attempt to provide a return to that tributary in following years.

Incubation at the MSCC results in a 97% survival rate through the first winter of life as opposed to 30% in the wild.

The Miramichi Salmon Association satellite rearing program started in 1983, and was developed as a program to hatch and rear salmon fry at remote stream sites. It has been a collaborative effort between MSA members, fishing camps and private companies in the Miramichi Watershed. It commenced with salmon fishing clubs at Rocky Brook and Black Brook, and at the height of the program we had up to three tanks at 14 different locations throughout the Miramichi system.

This year there will be will be more than 20 tanks producing almost 125,000 first year Atlantic salmon or sea-run brook trout fingerlings over the course of the summer. This program promotes direct investment in the fisheries resource by allowing individual camp owners to improve the survival and growth of salmon fry during their first year of life. Fry are brought to the sites in early summer and are released just before freeze-up in the fall.  If you are interested in helping to stock the river with juvenile Atlantic salmon, but do not have the proper conditions or time to invest in the satellite rearing program, donations can be made through the Riverstock Program, and juvenile salmon can be stocked in a desired location on the Miramichi.