“The Jack T. H. Fenety Scholarship is something we are very proud of. It was established to honour Mr. Fenety’s legendary contribution to the protection and enhancement of Atlantic salmon stocks. His stewardship of the Miramichi River has paralleled the survival of that watershed as one of the most productive sources of salmon stocks in the world.” -Mark Hambrook, Former MSA President

The Miramichi Salmon Association offers a major scholarship for salmon research in honour of its long-time former President, Jack Fenety of Fredericton. This scholarship is awarded each year to a selected graduate student attending a university who is conducting meaningful research about wild Atlantic Salmon, and/or its habitat, which will have relevance for the Miramichi watershed.

The Miramichi Salmon Association is a conservation group focused on the preservation and enhancement of wild Atlantic salmon throughout its spawning range, and especially in North America’s most abundant Atlantic salmon river, the Miramichi. The MSA, established in 1953, has as its mission statement: management actions to optimize the population of juvenile salmon stocks in the Miramichi River. It is directly involved in collaborative research and management initiatives to benefit the Miramichi River and its Atlantic salmon resources. Financial support for the MSA comes from the volunteer efforts and contributions of its members and sponsors both in Canada and the United States. Our organization maintains a fully operational salmonid culture and research facility with accommodations at the Miramichi Salmon Conservation Centre, with flow-through and re-circulation systems in support of research activities. The Centre is located on the banks of the Northwest Miramichi River at South Esk, New Brunswick and applicants that plan to utilize this facility will be given priority.

Congratulations to our 2022 recipient, Elise Collet! 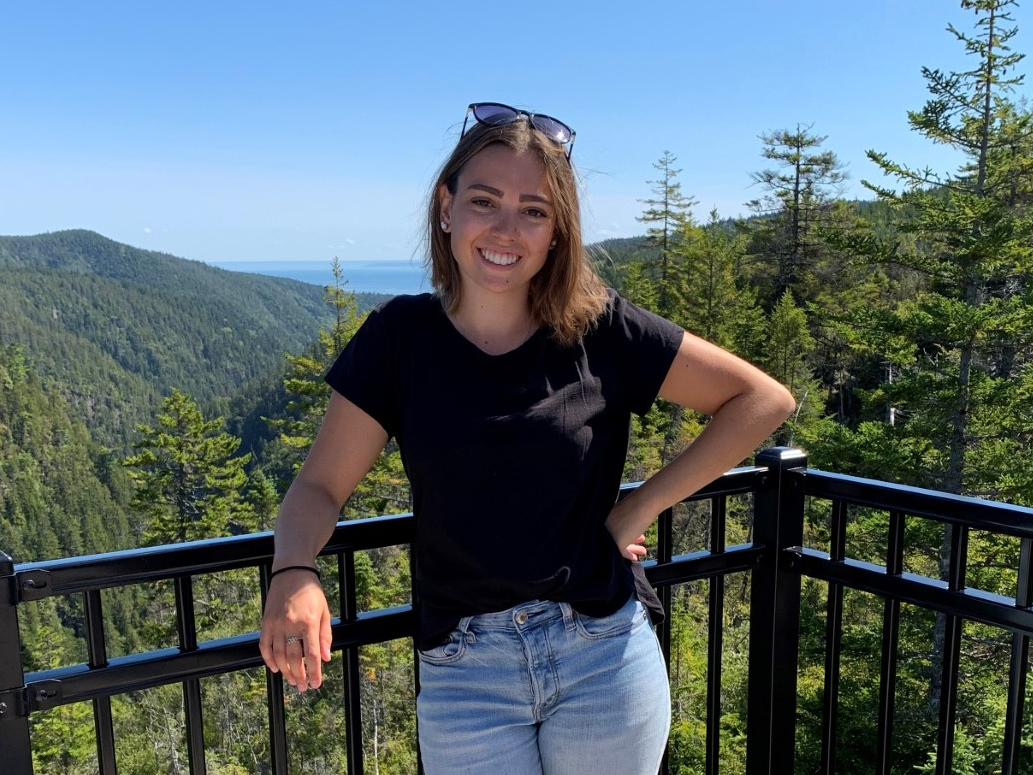 "My name is Elise Collet, and I am thrilled to be this year’s recipient of the Jack T.H. Fenety Conservation Scholarship. I am currently finishing a BSc in biology at St. Francis Xavier University where I have been completing an honour’s thesis on the regeneration ecology of Black ash trees in Nova Scotia. Over the course of my degree, I have had the opportunity to work for government organizations such as Parks New Brunswick and the department of Fisheries and Oceans. I have also worked for the Canadian Rivers Institute at the University of New Brunswick where I have been fortunate enough to work on many projects including the Fundy Salmon Recovery Project in Fundy National Park.

Current regulations imposed by Fisheries and Oceans Canada, Gulf Region, force river closures when the water temperature is ≥ 20°C for two consecutive nights. While these regulations aim to protect salmon, these regulations imply that temperature is homogenous throughout the river. Recent research highlights the need to understand the non-linearity of river thermal regimes and how behavioural differences may reflect this non-linearity. Therefore, there is a need to investigate the spatial and temporal variability of temperatures that trigger behavioural thermoregulation and use this information to create new management plans for Atlantic salmon. The goal of this project is to detail spatio-temporal variability of temperature triggers for thermal aggregation and develop a guide for fisheries managers that accounts for plasticity of salmon linked to landscape. I believe that this research will undoubtedly produce useful implications for the conservation and management of Atlantic salmon populations.

I have always been particularly interested in environmental and biological research that produces meaningful results that can aid in conservation efforts and inform management decisions. As such, I am very excited to pursue an MSc. project that focuses on those values. I am very grateful to the Miramichi Salmon Association for supporting me on this project and I cannot wait to begin!"

One scholarship per year valued at up to $10,000 CAD will be awarded. The funds will be disbursed directly to the student and may be used for the purchase of equipment and materials, for travel expenses during fieldwork, and as a living allowance. The funds may not be used to defer administrative fees or other costs with the university, government, or private collaborators. Multi-year proposals will be considered, however, funding is on an annual basis and the second year’s money would have to be applied for according to the regular funding schedule. The consequences to multi-year research must be identified if only one year of funding is provided.

The scholarship is for a student conducting graduate level research at a Canadian or American university.

Areas of research must involve the Atlantic salmon and provide knowledge that will assist the Miramichi Salmon Association in delivering its mission of management actions to optimize the population of juvenile salmon stocks in the Miramichi River. Relevant research topics include, but are not limited to, aspects on carrying capacity of habitat, inter-stage survival rates, constraints on production, effects of competition, predation at various life stages, the consequences of stocking juvenile salmon and ways to improve stocking strategies. The research can extend into the estuary as it relates to the survival of smolts or adults, but is not intended for marine research. The work does not necessarily have to be conducted on the Miramichi, but must be relevant to the Miramichi and the objectives of the MSA and priority will be given to work carried out at the Miramichi Salmon Conservation Centre.

A brief interim report describing progress to date is required in July of the funding year, before the second payment is released to the researcher. A final report summarizing research conducted, results and conclusions from the research must be submitted to the Miramichi Salmon Association within the 12-month period of funding. A hold-back of 10% of the scholarship will be provided upon receipt of the final report. A financial report is also required describing how the funds were used in the conduct of the research.

The Miramichi Salmon Association anticipates that much of the research sponsored under this scholarship fund will be published as university theses, refereed journals and in other publications. The MSA requires that its financial support to the research be acknowledged in such publications and that copies of the publications be provided to the MSA office.

Application procedure proposals are to be completed in the format described in Appendix 1 (see below) and submitted to the Miramichi Salmon Association.

Submit your proposal by e-mail:
robyn@miramichisalmon.ca

Proposals will be evaluated by the Miramichi Salmon Association using the following criteria:

For more information about the Jack T.H. Fenety Research Scholarship or the Miramichi Salmon Association, you can call the South Esk office at (506) 622-4000.