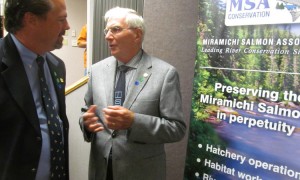 Miramichi Salmon Association board member Richard McGuigan speaks with chairman David Wilson ahead of the association’s dinner Tuesday night in Fredericton. The group is calling on Ottawa to take action to ensure the survival of the wild Atlantic salmon.
Photo: Shawn Berry/Legislature Bureau

FREDERICTON • Two groups concerned with a dramatic drop in the number of salmon recorded along the Miramichi River are calling on Ottawa to drastic steps to address the crisis.

“Anglers should release all the large salmon and grilse they catch and First Nations fishermen should use selective gear such as trap nets and release all large salmon. Gill nets for Atlantic salmon should be banned,” Bill Taylor, president of the Atlantic Salmon Federation said in a speech Tuesday night at the Miramichi Salmon Association dinner in Fredericton.

The Miramichi Salmon Association and the Atlantic Salmon Federation say the average number of salmon returns to the Miramichi River has rapidly declined from 82,000 a year in the 1990s to 23,000 a year since 2014.

“This year, with near perfect angling conditions, the returns to date appear to be even lower, with a likelihood of total returning salmon being as low as 12,000. These are frightening numbers,” said David Wilson, chairman of the Miramichi Salmon Association.

During the association’s annual dinner in Fredericton on Tuesday night, the two groups called on Prime Minister Stephen Harper to appoint a multi-disciplinary task force to create a wild Atlantic salmon action plan.

“We need to take immediate action to curtail the seriously declining salmon stocks from both our river and the other rivers in New Brunswick and eastern Canada,” Wilson said.

He said they hope action will be taken soon.

“It’s already too late. So our call is for immediacy, we think this fall so that the action that is necessary to be taken can be taken in the early spring.”

He said the groups will turn to the Atlantic caucus of the federal Conservative party to get the matter addressed.

The Miramichi River system isn’t the only salmon river facing the plight. Similar declines have been recorded in Quebec and other locations in Atlantic Canada.

About 500 people were expected at the dinner, including Progressive Conservative Leader David Alward and Liberal Leader Brian Gallant.

Fredericton MP Keith Ashfield, a former federal minister for fisheries, was recognized and honoured at the event for his work on championing wild Atlantic Salmon.

Bill Taylor, president of the Atlantic Salmon Federation, stressed that the downturn in salmon numbers threatens the $40 million impact of the recreational salmon fishery to the New Brunswick economy and the thousands of good seasonal and full-time jobs it provides to primarily rural areas.

He said Canada should fund and implement the Wild Atlantic Salmon Conservation Policy approved in 2009, invest in more assessment and enforcement, and remove the mandate of aquaculture promotion from the Department of Fisheries and Oceans, which is in direct conflict with wild fisheries conservation.”

“Some people will argue that the matter needs further study or that there are issues at play that are beyond our control such as poor sea survival and climate change. While that may be true, there is ample evidence and data currently available upon which a strong and effective action plan can be based,” Taylor said.

“For starters we need to stop killing so many salmon, especially during their migration at sea and those from populations that are not exceeding their minimum conservation limits.