Over the last week, CAST and MSA staff have been deploying/fishing a fyke net in hopes to capture summer run Atlantic salmon in the Northwest Miramichi (above Trout Brook) and Little Southwest Miramichi (Above Upper Oxbow Fishing Adventures Lodge). The fish that are successfully caught will be tagged with a radio tag and released. The Little Southwest Miramichi summer run salmon are part of a thermal habitat study, looking at what cold water refuge (thermal refuge) adult Atlantic salmon seek during the summer when water temperatures reach 22 – 25 degrees Celsius. These salmon will also be used for the migration and spawning behaviour study. The UNB/CAST radio tracking project hopes to track spawning behaviour of salmon in the Little Southwest and Northwest Miramichi River.

Fishing is currently underway in the Little Southwest Miramichi where 9 Grilse have been tagged. These fish have a temperature sensor incorporated in the radio tag, which will allow researchers to monitor salmon summer movements and thermal refuge use as part of the aforementioned thermal habitat/migration and spawning behavior studies. All fishing is conducted throughout the night to avoid high water temperatures. Fishing should be finished by the end of this week or into early next week on the Little Southwest Miramichi.

The work doesn’t end when the fish have been tagged, however. After tagging is completed, researchers will start mobile tracking radio tag salmon by truck and kayak on both river systems. This important field work will continue through the summer into the fall. 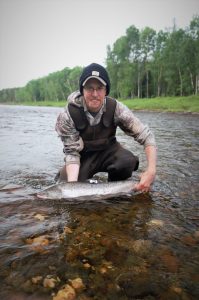