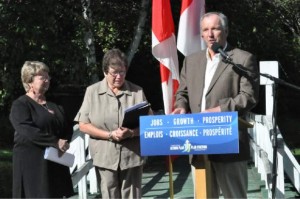 SOUTH ESK – Of the many threats to the security of Miramichi’s Atlantic salmon, there are few over which conservationists have any control.

Miramichi salmon stocks are in steady decline and biologists are pointing to everything from an expanded commercial fishery in Greenland, disease, the role of predatory species such as striped bass and seals, to an unknown weather phenomenon taking place at sea. Groups like the Miramichi Salmon Association have little if any influence on these issues.

But the salmon association does have a voice on what takes place within the confines of the Miramichi River watershed.

With that in mind, Fisheries and Oceans Minister Gail Shea made a visit to the scenic Miramichi Salmon Conservation Centre in South Esk Friday morning, announcing $51,400 in funding that will allow association staff to clear the way for the species to have the best possible access to their critical spawning grounds.

“The result will be improved salmon migration and overall this will promote a more robust recreational fishery in the region,” Shea said. “Recreational fishing contributes significantly to the Canadian economy, especially in rural areas – it’s not something we think about often, but anglers generated $8.3 billion for the Canadian economy last year.”

The value of the salmon fishery on the Miramichi alone contributes about $20-million to the region’s economy, with well over 600 jobs tied into the Miramichi’s angling and outfitting sector, according to a recent report published by the association.

But as it stands right now, the salmon are having a difficult time navigating the vast labyrinth of narrow tributaries that lead to the coolest, most remote stretches of the watershed where the fish like to spawn.

Getting in the way of their journey are a glut of beaver dams that choke the streams and tributaries. With this injection of government funding, allocated through the Recreational Fisheries Conservation Partnerships Program, the salmon association now has some resources to address the issue.

“With fewer salmon around, what we need is to get them to spawn in the most optimal conditions possible,” said association president Mark Hambrook. “So with this funding we will be able to do a massive beaver dam removal – we’re not out to kill the beaver or disrupt the beaver, all we’re going to do is poke a little hole in the dam to let the fish go by.”

The funding will also allow the organization to conduct aerial surveys using global positioning system technology that will pinpoint the exact location of any problem dams.

Hambrook said the goal is to breach roughly 100 beaver dams.

“Once we do this, it has to be done in a short period of time – we have to hire a lot of people to go out there and we’re hoping to start flying on Monday, with the hope that the work is all done in October,” he said.

Salmon stock numbers presented by Fisheries and Oceans Canada for the Miramichi River system in 2012 were some of the lowest in recent memory.

Hambrook noted data taken this summer shows that the amount of grilse and adult salmon returning to the region are no better than they were a year ago, a stark contrast to what he termed as “fantastic” returns in 2010 and 2011.

“I would get double the salary if I knew why, but the point is that we don’t know the exact causes – we feel a lot of it is happening in the estuaries and oceans and not in our river,” he said.

“We’re still producing good numbers of fish in our rivers and we just need to make sure we manage our river so we’re getting a maximum number of fish to the ocean.”

Miramichi Conservative MP Tilly O’Neill-Gordon, who was also on hand for the announcement, praised the salmon association, and Hambrook in particular, for commitment to the conservation and stewardship of the Miramichi’s most vital resource, its river system and the salmon that call it home.

“Everyone on this Miramichi River appreciates all that you do,” she said. “Your tireless efforts over your lifetime to promote conservation efforts throughout the Miramichi watershed must be commended.”