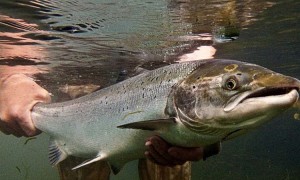 New Brunswick’s leading salmon conservation organizations will hold their annual fundraising dinner in Saint John this week against a backdrop of intensifying concern for the future of the Atlantic salmon and the thousands of people whose livelihoods depend on the recreational and aboriginal fishery.

The 12th Annual Autumn Run Dinner in Saint John will take place on Wednesday. Jacqueline Oland, an avid angler and a tireless volunteer and philanthropist, will serve as honorary chairwoman of the event, which hopes to raise funds for research on the Miramichi River.

The Miramichi Salmon Association, the New Brunswick Salmon Council and the Atlantic Salmon Federation are united in their goal of trying to lure the Atlantic salmon back from the brink of extinction, a goal that has become much more focused in 2014 after declining runs throughout most of the salmon’s global habitat.

“The 2014 salmon season was not a good one,” said Bill Taylor, president of the Atlantic Salmon Federation.

“Runs were down all over Eastern Canada. In fact, they were down throughout most of the North Atlantic – Ireland, Scotland, England, Wales, Norway, Iceland. The only areas that fared well were the far north, as in Sweden, Russia. We see the same thing in Canada – the further north you went in Canada, the better the salmon returns. So New Brunswick, Nova Scotia, the Gaspé of Quebec, even the north shore (of) Quebec did not do very well. Salmon runs were down 30 to 50 per cent on average. Northern Newfoundland, Labrador, Ungava Bay did better than other areas of Canada, but still not good in comparison to their usual returns.

“So there is very serious concern here in New Brunswick for the future of the species, the survival of the Atlantic salmon.”

Taylor said that if the Atlantic salmon, the king of the sport fish, ultimately reaches the point of no return, the thousands of people who depend on the fishery will lose their livelihoods, including those involved in New Brunswick’s $40-million annual recreational salmon fishery.

“There is a lucrative recreational salmon fishing industry here that supports a lot of very good full-time and seasonal jobs, and people are very worried for their livelihoods,” he said.

“So there are the conservation concerns and the environmental aspects of saving salmon as a barometer for the health of our environment, the canary in the coal mine, and that is all real and well and true. But there are also a lot of people whose livelihoods depend on healthy salmon runs and this year was a real wake-up call.”

Taylor said a good fall run is pulling up the numbers on the river this year, but the prospects remain grim for two of the main tributaries – the Northwest Miramichi and the Little Southwest Miramichi.

“There is a general decline throughout the North Atlantic,” Taylor said.

“That tells us, and the scientists are telling us, that it is a marine issue. It could be changing ocean conditions or temperatures as a result of climate change. There’s research that indicates growing predator populations like striped bass on the Miramichi and seals also are an issue. There is likely not a single reason or cause.”

Taylor said the salmon organizations are hoping to meet with Prime Minister Stephen Harper in the near future to address the crisis and encourage more investment in research and conservation.

He said the federal Department of Fisheries and Oceans has seen its annual budget for Atlantic salmon research dwindle almost in lockstep with the decline of the salmon.

“We are not criticizing DFO,” Taylor said.

“We don’t feel that the DFO has the manpower or the resources to deal with the magnitude of this issue. The Atlantic Salmon Federation has reviewed the budget that DFO has for Atlantic salmon from the 1980s up until today. The numbers are black and white – DFO’s budget for Atlantic salmon conservation, management, research, assessment and enforcement was around $25 million in the mid-’80s. The latest figures we could look at, for 2009-10, showed it was down to $12 million. We have been told by senior DFO officials that the budget has been reduced further since then.”

Taylor said all user and conservation groups in the provinces worked with the federal government through the mid-2000s up until 2009 to help DFO develop a policy for conservation.

“On paper, the policy is excellent and would go a long way to stemming the salmon’s decline,” he said. “What we have been told by DFO is they have no money to implement the policy.”

The annual fundraising dinner will be held at the Delta Brunswick on Wednesday evening. There also will be silent and live auctions.