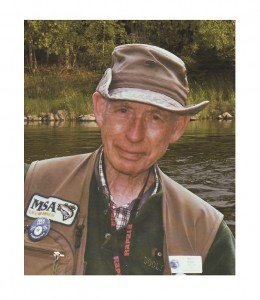 10 Sep 2013 07:03AMOver the years, J.W. Bud Bird has given his all to the Miramichi Salmon Association and, in the role of Canadian director of Campaign 60, he’s proven his support is stronger than ever.

As the association celebrates a milestone anniversary, it’s showing its appreciation for Bird by honouring him at the 18th annual MSA Fredericton Conservation Dinner, taking place Tuesday, Sept. 17 at the Fredericton Inn.

“We’ve honoured quite a few people at that conservation dinner and we realized that we hadn’t honoured Bud,” says Mark Hambrook, president of the Miramichi Salmon Association. “He is heading up our Campaign 60, our 60th anniversary fundraising campaign, so we thought it would be appropriate to acknowledge all that he’s done for the MSA by honouring him at the dinner.”

Bird’s impact on the MSA and its work has been huge.

“First of all, Bud brings a profile to the organization. With his many contacts, he’s kept the MSA current and a player in the salmon conservation business.

“If we need connections to politicians or whatever, he can open those doors for us,” says Hambrook. “It’s been very helpful. It doesn’t matter what party is in power, because he’s been a politician all his life, he has access to politicians.”

Bird brought his vast experience in both business and politics to his role as president of the MSA in 1996. He spent four years as president, two more as chairman and the most recent 11 years as chairman emeritus.

In the late 1990s, he helped steer organization of the Miramichi Watershed Management Committee, and in 2000 persuaded MSA’s board to support acquisition of the former Department of Fisheries and Oceans salmon hatchery at South Esk, which is now the Miramichi Salmon Conservation Centre.

Interestingly, one of Bird’s first moves as president was to organize a tribute to his predecessor, Jack T.H. Fenety, with a testimonial conservation dinner which quickly became the model for 17 more such events, up to and including the one planned to honour Bird next week.

“The first one to honour Jack Fenety’s work was such a tremendous success, we thought we would have an annual one each year to honour somebody,” says Hambrook. “Since then, we’ve honoured politicians and local people in the Fredericton area and supporters.”

He says anyone who is interested is welcome to come to the event at the Fredericton Inn.

“It’s open to anybody, really. We welcome everyone to come,” he says. “We’re expecting this to be a sold out event, so I wouldn’t wait too long before you got your tickets. We should have a full house.”

Proceeds from this event, like other fundraising events held by the MSA, help the organization continue to work towards the preservation and enhancement of the wild Atlantic salmon, and the protection of its habitat in the Miramichi watershed.

The association has become, and continues to grow, as a leading conservation organization, to ensure that the province’s great natural capital — the river and the salmon — can be cared for and enhanced so that their natural health and abundance can be increased and perpetuated in value for well into the future.

“Because it’s our 60th anniversary, we thought we should re-invigorate the MSA and there are a whole host of things that we’d like to do and we’re constrained from doing because we don’t have adequate funds,” says Hambrook. “We thought on our anniversary we should embark on a program to raise money and to get out and do more work to help conserve Atlantic salmon.”

The result is Campaign 60, under the direction of Bird. By helping to recruit more than 100 MSA members as volunteers, the fundraising campaign, which targets supporters in both Canada and the United States, has been overwhelmingly successful.

“We’re only halfway through and we’re almost reaching our target now. It’s very gratifying, and Bud’s leading the charge on this campaign,” says Hambrook. “We expect some fairly large players to come on board shortly, but up until now it’s been people giving $500, $1,000, $10,000. It’s been a lot of people that have dug into their personal pockets and made a contribution, and that is something else.”

He believes the campaign, like the MSA, appeals to people from all walks of life.

“When you look at New Brunswick and see that in the southern half of our province, salmon are on the endangered species list and you can’t angle for salmon, especially in the St. John River, the Petticodiac,” he says. “The Miramichi is the biggest salmon river in the province and I think people want to make sure that there is this place to go, that people can go and fish. Personally, I think that’s why they contribute so generously.”

You can show your support to the MSA and its conservation programs by supporting Campaign 60. Visit www.miramichisalmon.ca for more information.

The 18th annual MSA Fredericton Conservation Dinner honouring Bird will be held on Tuesday, Sept. 17, beginning at 5:30 p.m. at the Fredericton Inn. Tickets are $100 and are available by calling 457-2220.