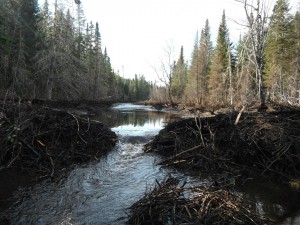 Funds raised at this year’s Fredericton Conservation Dinner will support the Miramichi Salmon Association’s ongoing conservation efforts, including removing in-stream obstructions that impede the upstream migration of spawning adults. This photo shows the mill stream after a beaver dam was removed.

The Miramichi Salmon Association is putting the focus on conservation and the people who are working to make it happen in this province.

On Tuesday, Sept. 16, the group will hold its 19th annual Fredericton Conservation Dinner at the Fredericton Inn. The event is a major fundraiser for the MSA.

“It’s become a very important fundraiser for us. We have a lot of auction items and the bidding is usually pretty good there, so it’s worked out well.”

The Conservation Dinner features both a live and silent auction, as well as raffle draws, he says. It’s open to everyone, not just members of the Miramichi Salmon Association. In fact, it’s a good way to learn more about what the organization does.

“Every year we usually honour someone that has been prominent in salmon conservation, and usually, we describe the work that they’ve done and it gives you a little insight into some of the personal commitments that have been made to conservation over the years,” he says.

This year, says Hambrook, the MSA is honouring MP Keith Ashfield for the critical responsibilities he carries towards the preservation of all marine species, especially the Atlantic salmon of the Miramichi River.

“Keith has been pretty instrumental over the years as the minister of natural resources for the province (from 2003 to 2006) and we’ve worked very closely with him. When Keith was minister of Natural Resources, we formed a first ever memorandum of understanding for watershed management, so federal government, provincial government and our watershed committee signed this agreement that we would consult on all issues related to the recreational fishery, so he was instrumental in that,” says Hambrook.

“Then certainly as minister of Fisheries and Oceans (from 2011 to 2013), he took a keen interest in Atlantic salmon and the plight that we’re having and helped us on several fronts.”

The work that the MSA is doing has a big impact on the province.

“A recent study showed that salmon angling on the Miramichi is a $20-million industry, so it’s pretty important, especially in rural New Brunswick where these camps are and the cook staff and the guides and the people that look after the lodges. So it’s a pretty important industry,” says Hambrook.

Funds raised at this year’s Conservation Dinner in Fredericton will support the MSA’s ongoing conservation efforts, in particular stocking low-density areas with first-feeding fry, expanded research to try and determine the causes of increased smolt predation, enhancing cold-water refuge habitat for both adult and juvenile fish, removing in-stream obstructions that impede the upstream migration of spawning adults, and advocating for science-based policies and regulations that support the salmon resource and the recreational fishery on the Miramichi.

“The Miramichi River system and its salmon population is experiencing some severe reduction in returning salmon,” says David Wilson, chairman of the MSA. “It’s reaching the point that this year is so bad, after last year being bad, that I refer to it now as a river in peril.” 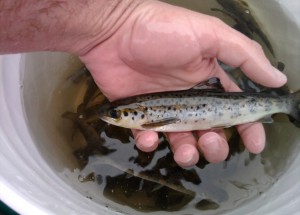 Funds raised at this year’s Fredericton Conservation Dinner will support the Miramichi Salmon Association’s ongoing conservation efforts, including expanded research to try and determine the causes of increased smolt predation. This photo shows a salmon smolt captured during the smolt study.

Though the MSA is trying to change this, these efforts currently appear to be failing, he says, as they’re not getting the recovery that they should.

“We know that we’re putting enough young fry and par into the river to sustain sufficient growth,” says Wilson. “But something is happening beyond the simple fact of the river system itself.”

The river system has its problems, he says, which the group is addressing bit by bit as part of their ongoing projects, but this goes beyond that.

“We are experiencing some bigger issues once the three-year fish, the smolt, depart for the first time to the ocean. Based on our counts, that we’ve undertaken for years, we’re losing to predation significant number compared to what we previously lost,” he says. “There has been a change in the balance of nature, if we can call it simply that.”

Even with hundreds of thousands of fish going to the ocean, they only expect a two or three per cent return, says Wilson, but even that small return is getting cut in half.

“Another thing that’s happening out in the ocean that has become pronounced in just the last two years, is that the returning fish that we are getting back into our rivers are significantly smaller than they were three years ago,” he says.

“We can guess a number of (reasons for these changes), but I don’t think guessing is good enough. We need distinct evidence.”

The money raised through the Conservation Dinner goes to help pay the salaries and expenses associated with helping the MSA do their work, he says, both on current projects and research into what is happening.

“The Miramichi River was traditionally the most prolific salmon river in North America. What we have seen in the last three years with returning salmon of any size almost being cut in half is a phenomenal change in what has traditionally been the strongest river in the system,” says Wilson.

We need to pay attention to these changes, not just because it affects the sport of angling, but because what happens on the Miramichi River impacts us environmentally as well as economically.

Like many who are involved with the MSA, Hambrook has personal reasons for supporting this important work.

“I grew up in Renous, and I’m at the age where there wasn’t much else to do when we were young except go fish and swim – depending on what the season was. I grew up salmon fishing and developed a passion for it, and by a twist of fate, ended up making it my career,” he says.

Wilson didn’t grow up on the Miramichi but still has a great appreciation for the area’s importance.

“I was a bit of a latecomer, not until my 40s did I get into salmon angling, but I love it,” he says.

Chances are those who live on the river grew up with this sport in their blood, he says.

“But if you take it up later in life, it becomes a phenomenal way of life in the sense that it’s not all about catching the fish. It’s more about being on the river and the sense of the wilderness and the sense of peace and tranquillity and friendship,” he says. “Those are the elements that make salmon fishing what it is.”

To learn more about the MSA, its projects, the conservation dinner or to purchase tickets, visit miramichisalmon.ca, call the Fredericton office at 457-2220 or the Miramichi office at 622-4000.