The 3rd annual “Jody Harrison Memorial Fall Salmon Classic” was held from October 2nd to 5th at the Otter Brook Salmon Club on the Little Southwest Miramichi.  Jody’s friends raised $ 285 which was donated to the NW Miramichi Smolt Study.  Although the fishing was less than spectacular they did manage to catch a few salmon and had a great turn out. Those attending and donating were:  Chris Barnett, Geoff Barnett, Jim Garland, Jason Currie, Derrick Bathurst, Tim Dobson, Richard Cormier, Brent Atkinson, Shawn Dickson and Greg MacDonald.  The “Lunker” award which is given to the person that lands the largest salmon was won by Geoff Barnett. 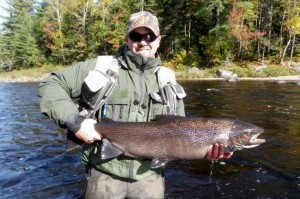 Jody Harrison was a co-owner of a fishing camp on the Little Southwest Miramichi. On Oct 22, 2011 he lost his life in an ATV accident. Like his friends, Jody was a big supporter of the MSA and salmon conservation in general. In honor of Jody, his friends began the Jody Harrison Memorial Fall Salmon Classic. As part of the event they asked for a small donation from everybody that spent time fishing at the camp on the weekend. The money they raised has been donated to the MSA in memory of Jody Harrison.