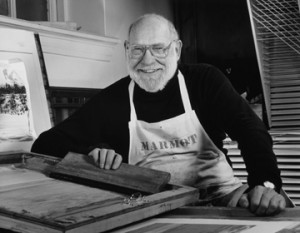 MIRAMICHI — Bruno Bobak, the renowned Canadian artist who passed away last year, left a sizable donation to the Miramichi Salmon Association that was just recently revealed.

In his will, the Polish/Canadian artist donated $400,000 to the association, which is halfway through a two million dollar fundraising campaign.

Mark Hambrook, president of the association focused on conserving Atlantic Salmon, said he is very grateful and a little shocked.

“I was pleasantly surprised, I had no idea,” he said.

Hambrook said he knew a donation was being made because Bobak’s son, Alexander, told him so a few weeks ago but he didn’t have any ideas as to the amount.

“I knew Bruno, and at his funeral I assumed (those attending) would talk about art but in all the eulogies, people talked about (his love) of salmon fishing,” Hambrook said.

The donation, will be going to the Miramichi Forever Funds, which will be using the money to fund projects like protecting cold water refuges for salmon and researching why almost half of young salmon perish before they reach the sea. The donation brought the campaign total up to $1.5 million.

Bobak, was born Bronislaw Josephus Bobak in 1923 in Wawelowska, Poland, and moved to Canada with his family two years later where they settled in Toronto. Upon entering the country, he was given the more “Canadian” name of Bruno by a customs officer. He graduated from Central Technical School, he joined the Canadian Army and became an the youngest official war artist during the Second World War in Canada, according to canadianarthistory.wikispaces.com.

He married Molly Lamb, another internationally acclaimed artist, in 1945 and they eventually moved to Fredericton in the ‘60s.

Bobak, a member of the Order of Canada, lived out the rest of his days in the capital city until his passing on Sept. 24 at the age of 88.

Though he lived in Fredericton, he came to Miramichi often to cast a line in the river as one of his great passions, along with his art, was salmon fishing, said Hambrook, who knew him personally.

“You couldn’t hep but know him, he was on the river all the time, a member of three different camps, he spent a lot of time fishing here,” he said.

Bobak was a conservationist at heart and practised catch-and-release fishing. He was also a lifetime member of the Miramichi Salmon Association.

Hambrook said the impressive sum has significantly helped their fundraising efforts and made their end goal of $2 million seem closer.

“We still have some very large donors to hear from yet and we are very confident that our $2 million target will be met. We’re only half way through our campaign,” said Hambrook.