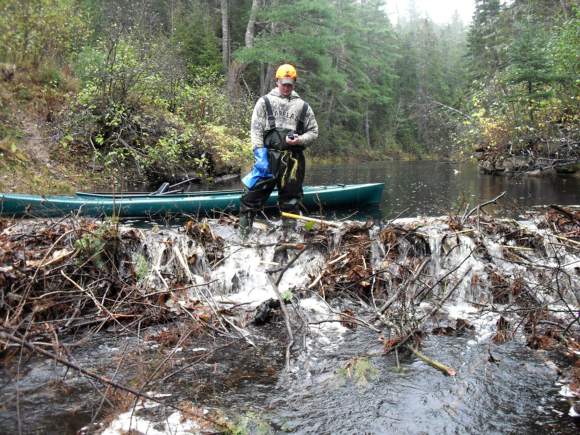 Workers with the Miramichi Salmon Association are stepping up conservation efforts as a result of declining fish numbers in the storied salmon river.

With fish populations nosediving for unknown reasons, the Miramichi Salmon Association is stepping up its efforts to conserve the threatened Atlantic salmon.

Mark Hambrook, president of the Miramichi Salmon Association, said in an interview Thursday the organization is marking its 60th anniversary this year by rededicating itself to the preservation of the king of sport fish.

Hambrook said there is urgency in the conservation plans of the association for the coming years, especially after a recent report by the federal Fisheries Department found a dismal return of young Atlantic salmon to the Miramichi in 2012.

“We had become a bit complacent because we were seeing improved returns over the past decade,” Hambrook said in an interview.

“There was enthusiasm because each year we seemed to be getting a little bit better. Then last year was a complete disaster – one of the worst returns we have had in a long, long time. It wakes you up to the fact that this is a very fragile resource. We need to be out there all the time, promoting conservation and improving the environment for the fish, where we can.”

According to the fisheries report, only about 8,000 grilse, which are young, small salmon, returned to their Miramichi spawning grounds last year. In 2011, 45,000 grilse returned.

The runs for adult salmon were slightly better, but not much – roughly 13,600 large salmon returned.

Hambrook said many of the fish disappear while at sea for reasons no one has been able to fathom.

But he said within the river system, organizations like the salmon association can make a focused effort to ensure that as many fish as possible survive and flourish before they make their perilous journey to the ocean.

The association is in the midst of a fundraising drive – given a major boost last week by a $400,000 donation from the estate of the late artist Bruno Bobak – that will help finance conservation efforts.

Hambrook said one of the initiatives involves establishing cold water refuges for salmon so they are not overly stressed, sometimes to the point of death, by summer heat and warming waters.

Fisheries officials reopened several salmon pools on the Miramichi on Thursday after they were closed because of the heat.

“There were thousands of fish in some of the pools that were closed,” Hambrook said.

“There are all kinds of little brooks coming into the river but because they are not structured right, the adults can’t use them. So they all congregate in a few areas. Our goal is to not have such huge concentrations but to spread them around so that you have 20 fish here, 50 there and 100 there as opposed to 3,000 in one spot.”

The small, cold-water brooks often are too broad where they enter the Miramichi, so the cold water trickles along the shallow edges of the river without helping the fish.

The salmon association is working on projects to narrow the channels of these brooks so the cool water rushes out of them more forcefully, gushing into the deeper waters of the river.

The group also is looking at digging some pools deeper to give the fish more of a chance to escape the heat. They also want to place boulders in pools to give the fish shelter and to discourage illegal netting.

Scientists have warned that global warming may eventually mean the end of cold-water fish like the Atlantic salmon and brook trout.

“I hope we don’t write them off yet,” Hambrook said.

He said the salmon association is looking to co-operate with the federal Fisheries Department and other salmon conservation groups to examine why so many fish die when leaving the Miramichi and entering the tidal estuary.

Hambrook said as many as 50 per cent of salmon entering the salt waters of the estuary do not survive. He said it could be predation by bass or seals, or something in the river system may be weakening the salmon’s ability to withstand the change to salt water.

“This has normally been a zone where a fair bit of mortality would occur, but it appears this mortality is getting higher,” he said. “I mean, around 50 per cent are dying in the estuary.

“This is one area where we want collaboration with DFO, the Atlantic Salmon Federation and others. It will be a complex research program.”