Pleased to share that earlier today, the Honourable Gail Shea, Minister of Fisheries and Oceans, along with Tilly O’Neill-Gordon, Member of Parliament for Miramichi, announced the creation of a new Ministerial Advisory Committee on Atlantic salmon to help determine the course of action to address low returns of Atlantic salmon on the East coast. This action by Minister Shea responds in large part to the ‘Call to Action’ that the MSA and ASF jointly made at the MSA Gala Dinner in Fredericton this past September. We are very pleased the Minister chose to make her announcement here in the Miramichi. 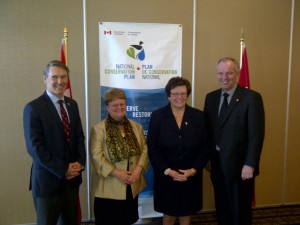 In addition to announcing the Advisory Committee, the Minister also announced that the MSA will be receiving $33,000 through the Recreational Fisheries Partnership Program to support the long-term habitat enhancement of two important cold-water pools, specifically the one located at the confluence of Otter Brook and the Little Southwest Miramichi, and the other at the confluence of Indiantown Brook and the main Southwest Miramichi.