Along with releasing trout, the schools also released salmon as a part of the annual salmon release program. Both of these initiatives will help boost the number of fish in the water, said a news release.

Children from Metepenagiag First Nation assisted in the release and were ecstatic to play a role.

“Getting children involved with this sort of activity at this age is critical because it places importance on sustainability”, said Metepenagiag chief Freeman Ward.

The team was back at the water’s edge the following week on June 10 as well, releasing another 500 trout. This time, they had the help of youth from the Eel Ground First Nation School.

“A great day was had by all and both releases would not have been possible without the excellent cooperation of all teachers and students,” said George Ginnish, chief of Eel Ground First Nation. 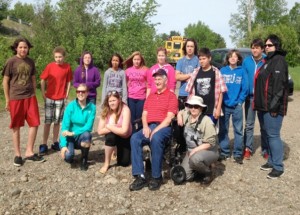 The council had various partners in the project, including the Miramichi Salmon Association, who delivered the trout to the release sites, as well as Fisheries and Oceans Canada, who assisted in the actual releases.