In April 2012, the Miramichi Salmon Association (MSA), in partnership with the Atlantic Salmon Federation (ASF) tagged 10 large Atlantic salmon kelt with pop-up satellite tags in an effort to help determine where these fish are migrating and feeding when they return to the ocean and where losses are occurring. Nine of the ten tagged salmon left the river for the ocean and if they survived, would return again this summer or most likely, return next year. 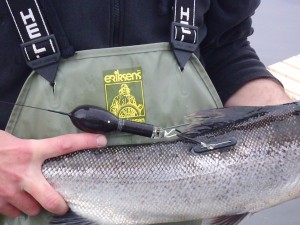 Pop-up satellite tags provide a record of where the fish travels and the temperatures and depths they are migrating through as they feed in the ocean. The data is logged hourly in the tag and when the fish dies or the study ends, the tag pops off, floats to the surface and transmits the data to a satellite receiver. The tags however will only pop off in salt water. Thus salmon returning to the river this summer will maintain their tag.

It is very important to the MSA and ASF to recover the tags and we do have staff searching the river with portable receivers hoping to pick up the transmitter again. There is a chance though that the salmon will be angled, thus we are offering a $200 reward to anyone that returns the tag to us. The tag is large and is attached to the dorsal fin. If you do catch the fish with this device please handle the fish very carefully, remove the device, return the salmon to the river, and contact us at 506.622.4000 to return the tag and collect your reward.

The information collected from pop up tags will help answer the question of where salmon are traveling and the reasons for the low returns of Atlantic salmon back to the Miramichi as well as other river systems in Atlantic Canada. This is a joint project between the Atlantic Salmon Federation and the Miramichi Salmon Association with funding from the New Brunswick Wildlife Trust Fund.