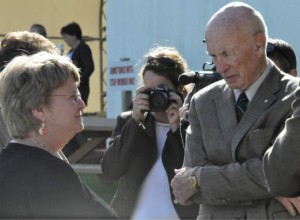 SOUTH ESK – There are many people out there, from all over North America, who are doing everything in their power to ensure the Atlantic salmon that inhabit the Miramichi River ecosystem are protected for generations to come.

J.W. Bud Bird is one of those people, and he’s also the man responsible for rallying that support and raising valuable funds in a great time of need for the region’s most iconic species and arguably its most valuable resource.

The well-known Fredericton businessman and former politician has, for many years, been actively involved in the Miramichi salmon community, orchestrating countless conservation efforts and lending his articulate voice to various lobbying and fundraising efforts all designed with the protection of the salmon at the forefront.

Standing on the manicured grounds of the scenic Miramichi Salmon Conservation Centre, the former fish hatchery in South Esk for which he brokered a deal to acquire from the federal government 13 years ago, Bird said although the region’s recreational salmon fishing industry is facing several challenges, he’s still optimistic about the future.

“We’re all very concerned about the future of the Miramichi salmon – the runs are approaching all-time lows and the decline has been ongoing for (many years),” Bird said. “But we don’t despair – the salmon is the symbol of the environment in eastern Canada and it’s a resource that we must simply find a way to save.”

Bird doesn’t elect to dwell on the multitude of issues that are threatening the sustainability of Miramichi salmon stocks.

Between an escalating commercial fishery in Greenland and the threat of predatory species such as striped bass and seals, many theories abound as to why fewer salmon are returning to their Miramichi spawning grounds each year.

Bird’s focus right now is ensuring the salmon association, stewards of the Miramichi River watershed for the past 60 years, continues to have the resources it needs to be able to apply the science, research and strong voice that will be required to protect the king of sport fish well into the future.

Now in his 80s, Bird is the lead organizer of the association’s 60th anniversary fundraising initiative, entitled Campaign 60, a massive undertaking that aims to raise at least $2 million to the Miramichi Forever Funds.

The intent of the Miramichi Forever Funds, one based in Canada and another based in the United States, is to continue to receive and allocate discretionary donations, endowment contributions, long-term trust commitments and bequests from individuals, families, companies and institutions who want to see the conservation of the Miramichi salmon continue forever.

So far, Bird said the undertaking has been a smashing success.

“We’re encouraged by the process, by the number of people who continue to support the conservation mission,” he said. “We’ve reached almost 80 per cent of our goal and the campaign is barely half over – it’s just fantastic and it really goes to show that the support is there.”

He said the organization is also optimistic that the funds raised from the campaign will go a long way toward helping answer some of the many questions conservationists have been asking about the low salmon returns.

Bird said he has no doubt that some meaningful research will take place if the campaign is successful in reaching its goals.

“We hope as a result of this campaign we will be able to do a more intensive analysis of what is actually happening to the smolts, the young salmon as they go to sea, and what is happening from the time they leave freshwater and get into the estuary and into the bay,” he said.

“Early studies have indicated to us that frequently only half of the smolts that leave the head of tide get to the open ocean – so something is happening very significantly within the estuary, whether it’s predators, striped bass or seals, disease, industrial applications or whatever … we just don’t know and it deserves a great deal of studying.”

The Miramichi Salmon Association was formed in 1953 by conservationists from New Brunswick and New England wanting to protect and preserve the Atlantic salmon.

The group’s work covers the Miramichi River watershed, covering the main Southwest and Northwest branches, along with 37 tributaries and 7,700 individual small streams. The Miramichi watershed sees the largest run of wild Atlantic salmon in North America and as a result contributes $20 million and 637 full-time equivalent jobs to the province’s economy each year.

To learn more about the Miramichi Salmon Association and Campaign 60, log onto miramichisalmon.ca or phone 622-4000.