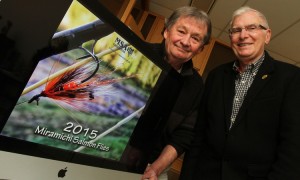 Greg Sprague, left, a member of the Miramichi Salmon Association board, and David Wilson, right, chairman of the board, are encouraging people to get the new fundraising calendar and help support the important work being done by the association.
Photo: Stephen MacGillivray/The Daily Gleaner

This is a critical time for salmon, say members of the board of the Miramichi Salmon Association.

“We’re lobbying intensely, the MSA working with the Atlantic Salmon Federation, to get the prime minister to declare a crisis in the Atlantic salmon because we’re just not getting the returns of fish. There are small fish going out to the ocean, but there is something happening out in the ocean,” says Greg Sprague, a member of the MSA board. “The returns we’re getting at the moment are the lowest in history.”

Whatever is happening is unknown, and could be anything from climate change to increased predators.

“We think we have a good handle on what’s happening in the rivers. The fish come in, they lay their eggs, the fish hatch, we can count the number of small fish going out,” he says.

“That’s keeping the numbers up in terms of the fish going out to the ocean,” he says, adding that the number of returning salmon is not enough to sustain the fishery.

This doesn’t just affect the Miramichi, says Sprague. It affects Quebec and all of the Atlantic provinces.

“But it’s particularly hard on the Miramichi as salmon fishing is such a way of life there. It provides employment. It’s just part of the culture of the Miramichi to be able to see salmon and fish for them,” he says.

It’s a huge tourist draw to the area, bringing people from around the world to this incredible gem, he says.

“We’re doing everything we can to protect the species and help the salmon survive, but at this point we really need help from the federal government,” he says.

Life for a salmon is a challenge from the beginning. The fish can lay several thousands of eggs, but only three per cent of the eggs survive and hatch. Even before they get to the ocean, while they’re still in the river system, they face a number of threats, including animals, birds, other fish and humans.

“Some of the other threats to salmon in the river are climate change, where the rivers seem to be getting warmer and the salmon can’t tolerate warm water,” he says.

Then there are toxins getting into the river. Add to this diseases. Once they get out to sea, there are more dangers and they have to find food.

“Another big problem in the ocean is what we call the bycatch. Canadian fisheries aren’t catching salmon legally, but they’re catching other stuff and they get the salmon in the nets,” he says. “It’s not easy being a salmon out there.”

While there are lots of things working against the salmon, the MSA is working to make things better. One way they’re doing this is through the action plan they’ve created.

“Our request is two-fold. Number one, it’s to the prime minister to address the issue of wild Atlantic salmon and do so by creating some kind of task force,” says David Wilson, chairman of the MSA board.

This needs to be done quickly, as this is an emergency, he says.

“Coinciding with that, there is a responsibility for each province.”

Each has unique issues that need to be addressed with respect to the salmon fishery.

“The federal responsibility deals completely with the alleged science of the fish and the count and its strength or weakness in its ability to spawn sufficient young to seed the river,” he says.

Some of the action that the MSA believes is essential – from the angling side of things – include barbless hooks, complete catch and release for all sizes for recreational anglers and no use of gill nets by anyone.

These are federal responsibilities, says Wilson.

Provincially, the government can maintain the current nets in the river system, which serve as a holding spot for salmon until it’s time for them to spawn. This helps protect them from poachers. Cold water pools need to be maintained. Beaver damns need to be breached during spawning time so they can reach their spawning habitat, and when necessary, to get nuisance permits to eliminate the beaver causing the greatest concern.

“The third thing is (the province) can support us to Ottawa, and that’s probably their biggest role,” says Wilson.

Through it all, the MSA will continue to work to protect the Atlantic salmon.

“We still need ongoing research – it’s going to take years and years to figure out what’s going on – but there are some very specific items that could happen tomorrow if we just got it made a priority, and we think it needs to be made a priority,” says Sprague. “That’s why we’re calling it an action plan.”

One way people can support the work being done by the MSA is by purchasing a copy of the association’s annual calendar.

“We’re very fortunate. We have 12 sponsors who pay for the production, so all the money raised through the sale of the calendar goes towards three areas – education, research and conservation projects,” he says.

Over the years, the calendars have become a bit of a collector’s item, as they’ve had different themes each year.

“Last year, we did the first of two years on Atlantic salmon flies and the art of fly tying, so this year is the second in the two-part series of calendars. We have 24 flies featured in the calendar,” says Sprague. “These are salmon flies that are frequently found on the Miramichi, and for some reason they tend to work on the Miramichi.”

They also tend to have interesting names, he says, like the Green Widow, the Same Thing Murray, the Woolly Bugger and the Green Slime Muddler, among others.

“Fly tying is really an art, so we have many artists in this province tying gorgeous flies. Some of them you don’t like to use because they’re so pretty,” he says.

The work of some of those artists is featured in the calendar, with flies from well-known tiers like Deverne Jones, Matthew Doak, Jerry Doak, Bruce Waugh, Cathy Colford-Mehlitz, Sid Matchett and more.

But Sprague says the best way to get a copy is to join the association, which is sent every year as part of your membership, at no additional charge.

The cost for a regular membership is $50 for the year and for first-year members it’s $25.

The calendars are $15 and can be purchased by calling one of the MSA offices. In Fredericton, call Jo-Anne Linton at 457-2220 and in Miramichi, call Nola Chaisson at 622-4000. Calendars are also available through the website, miramichisalmon.ca.

To learn more about the association, visit miramichisalmon.ca.