This past month has gone by in a flash and we have had a very busy field crew here at the MSA. June started with the extraction of our smolt wheels from the Little Southwest Miramichi River after collecting a total of 5000 smolt for the Smolt to Adult Supplementation program. For two weeks we collected Plankton samples for our new striped bass larval study in 3 different rivers. The samples are now being processed in the hopes of larval bass and eggs being identified. The first-feeding fry are now being released into their natal rivers. A first-feeding fry is a recently hatched salmon which has absorbed its yolk sac and has just begun to eat solid foods. The MSA’s trucks have been covering a lot of ground delivering the fry to Juniper, the Cains River, and the Sevogle. Additionally, we have delivered salmon fry to satellite rearing tanks at the Miramichi Headwaters Salmon Federation and JD Irving Ltd in Juniper where those fish will be released as fall fingerling in the Juniper, Burnthill and Clearwater areas. 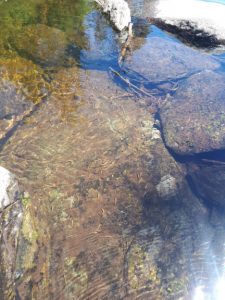